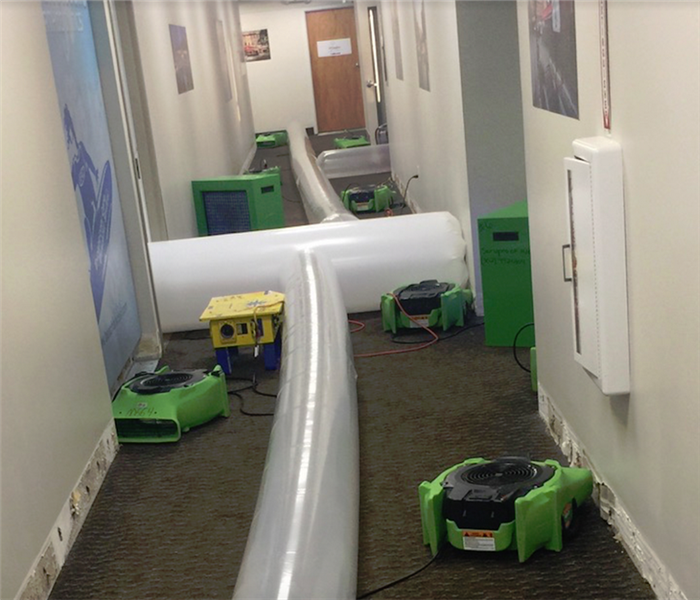 Excess water can quickly affect the structure and contents of your home. Contact our certified team for water removal and remediation services.

Wilmington is the most populous city in the Blue Hen State, sporting over 70,000 residents as of 2019 census data. The land was originally home to Lenape tribespeople, who referred to the land as “Pakehakink” or “Paxahakink,” before being settled in the 17th century primarily by European settlers from the Netherlands, Denmark, and Sweden.

The Corporate Capital of the World is most well known for its contributions to chemical and weapons development and the home of the French Huguenot du Pont family, who would later found the DuPont corporation. Manufacturing in Wilmington focused on gunpowder, iron, leather, and transportation. By the mid-19th century, Wilmington was a prolific producer of carriages and iron ships.

In the first half of the 20th century, Wilmington was well-equipped to handle the production needs of the First and Second World Wars. Factories produced everything from cars and machinery to clothes and leather goods.

After World War II, Wilmington thrived due to the booming postwar economy and the significant improvements to infrastructure during the development of the interstate system. This economic upturn allowed the city’s size to increase dramatically and focus on building more residential districts.

The city is currently packed to the brim with cultural sites, art galleries, and other contributions to the arts and culture. Famed attractions in Wilmington include:

Wilmington is home to the Du Pont family’s first estate in the Americas. The family remains one of the most wealthy in the United States. Their history in the United States started in 1800 when Pierre Samuel du Pont de Nemours migrated with his two sons to Delaware. Once there, one of the sons, Éleuthère Irénée, founded a gunpowder manufacturing plant near the Brandywine River.

Its modest beginnings took advantage of the abundance of natural resources available for manufacture. Eventually, they became the world’s largest black powder producer. An estimated 10 percent of Delaware’s population is purported to have been employed by the Du Pont family at the zenith of their various business ventures.

Several Wilmington locales are named for the Du Ponts and their associated businesses, especially along Delaware Route 141. These include:

Today, the Du Ponts are more well-known globally for their associations with business, politics, and philanthropy, with a total estimated value in the billions. In Wilmington, the first estate founded by the family that housed the gunpowder plant, anglicized as Eleutheran Mills, remains to this day.

Wilmington, and the state of Delaware as a whole, are referred to as the “Corporate Capital” of both America and the world. Several factors contribute to this particular moniker. For one, more than 60 percent of Fortune 500 companies are incorporated in Delaware. On top of that, over 75 percent of initial public offerings are conducted by businesses incorporated in Delaware.

So many companies choose to incorporate in Delaware that an estimated 25 percent of the state’s revenue comes specifically from incorporation. In Wilmington alone, over 300,000 businesses are registered at the CT Corporation on North Orange Street.

Highly competitive corporate tax rates, combined with the Court of Chancery ruling on corporate cases without juries, allow commercial entities to take care of legal matters quickly. Bipartisan efforts in government at the local, state, and federal levels have allowed for the proliferation of Delaware’s generous incorporation regulations over the years.

While other states, like Nevada and Wyoming, strive to implement similar practices in tandem with a lack of state corporate tax rates, Delaware’s Court of Chancery offers a wealth of influential legal precedents and high-profile cases that make it a preferable option for commercial entities.

The Court of Chancery differs from a typical court. The lawyers and judges appointed for cases specialize specifically in corporate law. This constitutional court exists separately from the state’s Supreme and Superior Courts to allow for more expedient handling of corporate claims, as well as civil and criminal matters.

What Does SERVPRO’s Structural Drying for a Wilmington Home Entail?

Structural drying is an essential part of water removal for Wilmington homes. This process depends on multiple tasks performed by SERVPRO’s Institute of Inspection Cleaning and Restoration Certification (IICRC) accredited technicians to succeed. These include the following:

Proper placement of centrifugal air movers is crucial for ensuring that dehumidifiers can catch and isolate humid air to replace it with warm, dry air that successfully restores water damage in your home. Depending on the scale of the damage and the area in your home where the disaster occurred, SERVPRO techs can also erect polyethylene drying chambers to accelerate the process.

Various models of air movers are used for different applications during drying. Air movers with multiple speed settings, for example, are favored for drying tented carpet both on the surface and underneath. Technicians typically place air movers along walls every 10 to 16 linear feet at 45-degree angles perpendicularly to the wall to pull moisture off of them. These devices can also be positioned to dry inside of flooring, walls, and ceiling cavities.

SERVPRO of Hockessin / Elsmere can ensure that your home looks “Like it never even happened.” Call (302) 992-0104 for a full suite of restoration services that can return your property to a clean and safe condition.